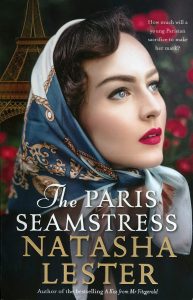 Yes I am a Francophile with an interest in fashion harking back to my childhood and a mother who would have liked to be a fashion designer had the War and the thinking of the times not intervened.

This is West Australian writer Natasha Lester’s fifth novel. It is set in New York and Paris jumping between the World War II era and the present day, and ably entangles us in a story of both darkness and light – a true family saga of secrets, intrigue, love and lies.

Its backdrop is the fashion industry and the world of the spy, the French underground, the horrors of Nazism on a grand scale and domestic violence and cruelty on the macro. Ms Lester tells us that she has woven real and fictitious characters into this tale and that she was deeply interested in examining the long-term inter-generational legacy of domestic terror on women. As well, she interests herself in the big socio-political question of the status of women – often through her feisty main women characters. But this is not a melodrama and many of the main male characters also win our admiration for their excellent qualities of humour, steadfastness and ethical probity.

Australia gets a nod here too as the origin of one of the main female characters and as the homeland of one strand of the Estella’s family.